An easily constructed, low-cost simulator
is assessed for its efficacy in the surgical training
of veterinary science undergraduates

There is a growing need for the development of alternatives to reduce, replace and refine  the use of animals for surgical training in contemporary veterinary education at the undergraduate level. In the present study, a simulator to suture a midline laparotomy in the rabbit was designed, that could be constructed from widely-available and low-cost materials. The simulator was used to develop surgical skills in students at the undergraduate level of veterinary medicine. Thirty-five, third-year veterinary students, with no previous surgical experience, were divided into two groups: a control group that did not use the simulator (n = 19), and an experimental group that used the simulator three times to practise the suturing of a laparotomy (n = 16). Later, both groups performed
a midline laparotomy in an anaesthetised rabbit, and the rate of closure of each anatomical plane (peritoneum, additional reinforcement, and skin) was measured.

The usefulness of simulators

The surgical training of undergraduate students by using live animals provides few opportunities for real training and is applicable only to certain surgical techniques. In addition, it also raises serious ethical and animal welfare considerations. The students themselves are also subjected to a level of stress, this being, in most cases, a cause of errors. Consequently, they do not adequately benefit from the training provided.1,2

In veterinary medicine and animal sciences, the Three Rs principles are being implemented as widely as possible. This involves the reduction, replacement and refinement of animal use, both in experiments and in teaching.3 One way to accomplish this is through the use of various simulators in their different forms, such as synthetic simulators, multimedia simulations, virtual reality, carcasses, and ethically sourced animal tissues.4,5 These provide training alternatives, which permit the acquisition of skills to successfully meet the needs of future clinical and surgical experiences with live patients, and to ensure that maximum educational value is achieved during practical training.6

The fidelity of a simulator is determined by how much realism is provided through characteristics such as visual cues, touch, the ability to feedback, and interaction with the student. In general, simulators can be divided into two groups: high-fidelity simulators, which are usually highly technical, detailed and realistic; and low-fidelity simulators, which have a low level of realism, are usually made with widely available and low-cost materials, are often portable, and can be used on a table. Despite their simplicity, the latter group of simulators assist the development of psychomotor skills.7 Some limitations of the use of simulators are related to their cost or difficulty in sourcing spare parts. Moreover, despite the large number of simulators that have been developed, few studies have been conducted to evaluate their effectiveness, leaving the concept of teaching through simulators at an empirical stage.8 Therefore, it is necessary to develop inexpensive, easy-to-construct simulators that support the process of surgical teaching, and also to quantitatively assess the effectiveness of their use. Therefore, the aim of this work was to develop and validate a low-fidelity simulator to assist in the teaching of the correct technique for closing a rabbit midline laparotomy. 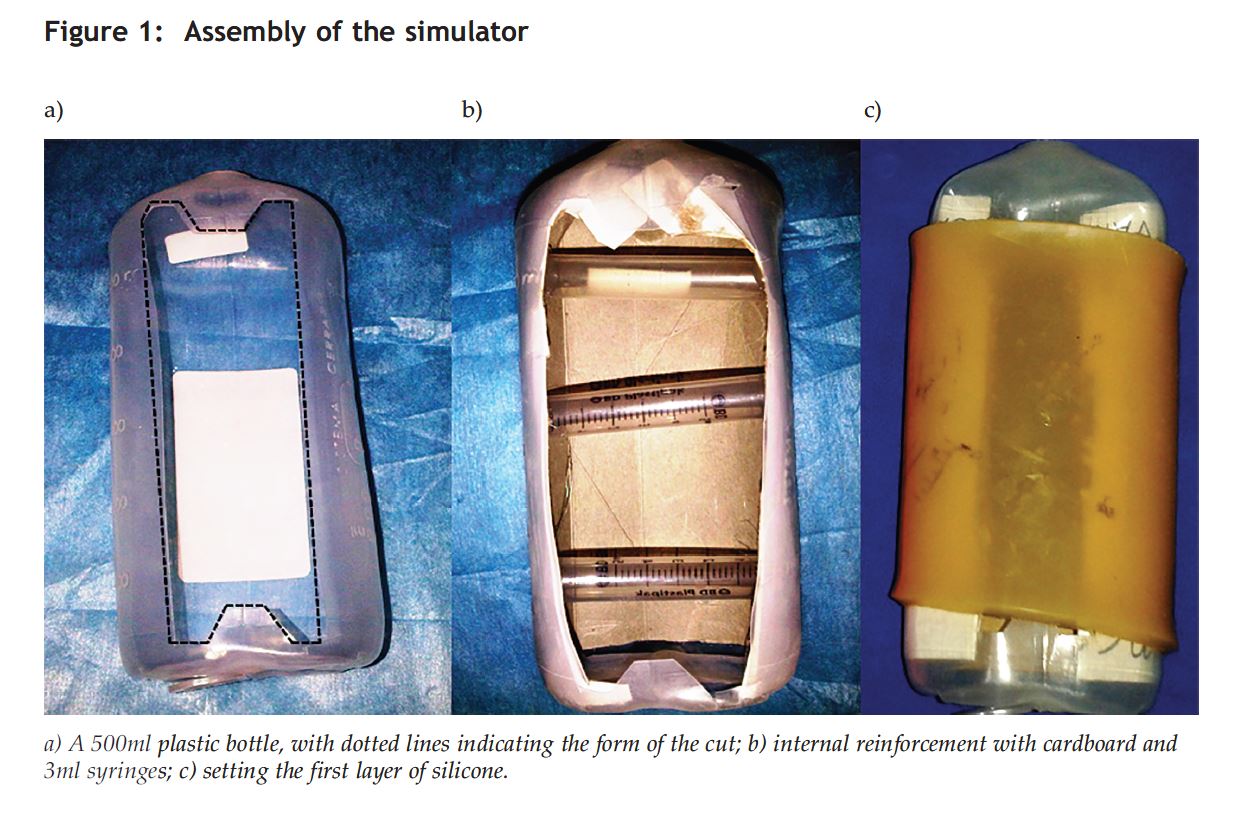 Development of the simulator

A 10cm long and 4cm wide opening was made in an empty plastic 500ml solution bottle (Pisa Agropecuaria, Guadalajara, Jalisco, Mexico), leaving protruding areas to represent both the xiphoid process and the pubic symphysis (Figure 1a). To give support to the bottle, an internal  cardboard lining was added, as well as three 3ml syringes widthwise (Figure 1b). Two 3mm thick silicone sheets were made by pouring 270ml of PE53® silicone rubber (Poliformas Plasticas, Mexico City, Mexico) into a mould, 23cm long by 13cm wide, which was allowed to set at room temperature for 24 hours.

The back-board from a standard paper clipboard was used as the simulator base, with the plastic bottle placed onto the board and the first sheet of silicone overlaid, in order to simulate the peritoneum (Figure 1c). Subsequently, the rectus abdominis muscles were simulated by placing two sheets of 3mm thick × 28cm long × 21cm wide polypropylene around the bottle (Foamy; Mylin, Mexico City, Mexico), leaving a gap of 3cm in width along the entire midline. Finally, this layer was covered with the second sheet of silicone to simulate skin, and both sheets of silicone were tightened onto the clipboard base with paper clips (Figure 2a). The appropriate size head, thorax and abdominal organs were fashioned from cotton fabric and added to the simulator prior to use (Figure 2a). 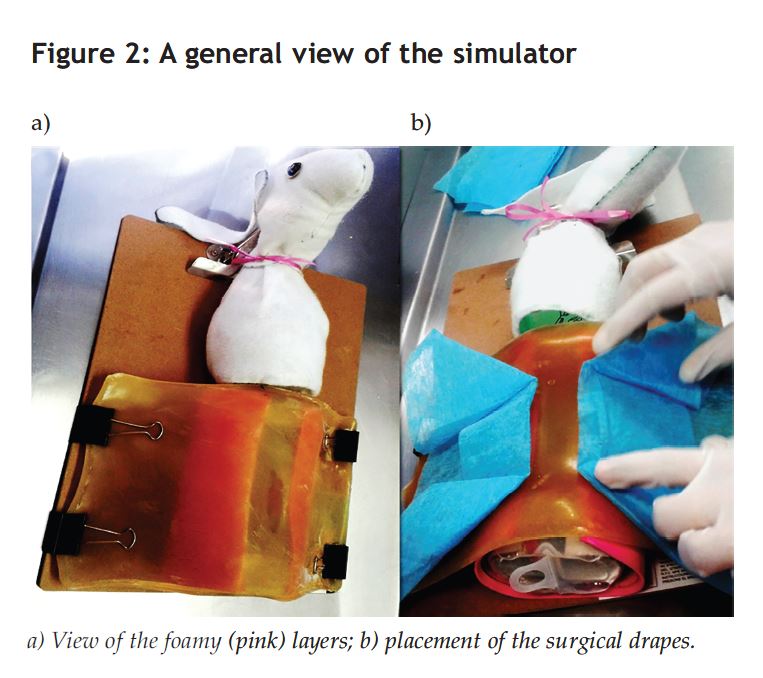 Thirty-five students in the third year of a veterinary medicine and zootechnics course at the Universidad Autónoma Metropolitana, Unidad Xochimilco, with no previous experience in surgery, received a 120-minute theory session, supported with slides, on the midline laparotomy technique and suture in rabbits.9 This was part of the Surgical-Veterinary Therapeutic Bases module. Later, the students were divided into two groups: the experimental group (n = 16), which  was organised in four surgical teams of four participants each, and the control group (n = 19), which was divided in four groups of four participants and one three-participant group. Each student was assigned his/her rotation within the group, in such a way that they all covered all the roles once (surgeon, first assistant, scrub nurse, and anaesthesiologist). Each surgeon/first assistant team (according to the assigned rotation) of the experimental group used the laparotomy simulator two days prior to the practice on the live animals. They were asked to repeat three times the following procedure: put the surgical drapes in place (Figure 2b); perform a 7cm incision, including all the layers of the simulator; suture, with continuous stitches, the first silicone layer (peritoneum), which was reinforced with inverted ‘U’ stitches; and suture, with Sarnoff stitches, the second silicone layer (skin). The first assistant was only allowed to help the surgeon in handling the surgical instruments that were used. The closure of planes was performed by using nylon 2-0 suture (Figure 3). 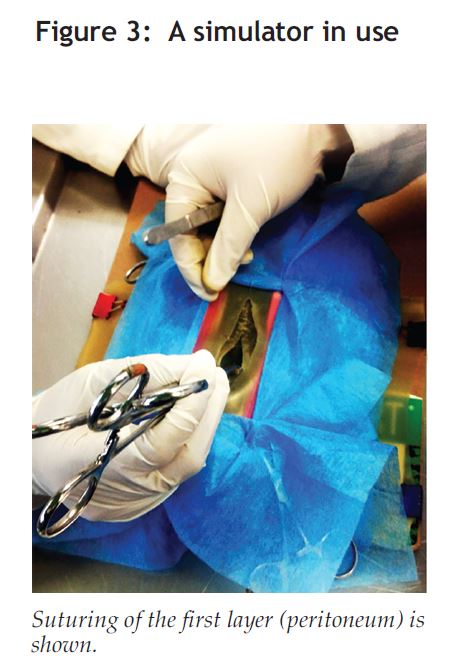 Subsequently, the participants of both groups performed midline laparotomies on 35 clinically healthy New Zealand rabbits (Oryctolagus cuniculus), suturing midline (peritoneum) with continuous stitching, reinforcing (muscular fascia) with inverted ‘U’ stitches, and suturing the skin with Sarnoff stitches, all performed under general anesthesia, according to the method previously described by Perez-Rivero and Rendón-Franco.10 Both the control group and the experimental group performed one surgery weekly. In total, evaluations were completed in 4 weeks (i.e. one week for each participant from each team).

Since the lengths of the incisions were different in all the cases, the rate of closure of each anatomic plane and all planes in total, was calculated as follows: the length of each incision was measured (in centimetres), and this was divided by the time (in minutes) taken to complete the suturing. The result was expressed in minutes per linear centimetre of incision (MLCI). During the whole process, each group was supervised by two professors and five assistant instructors. 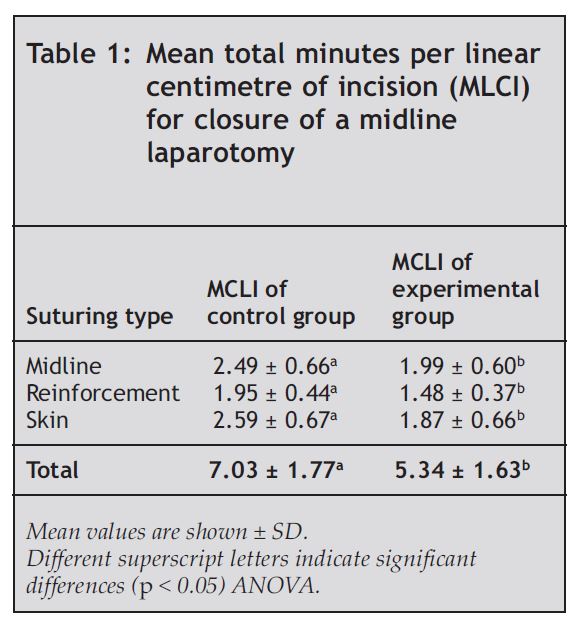 Students having the prior role of first assistant, scrub nurse, and/or anaesthesiologist, would have previously observed and/or helped in the performance of the laparotomy. This could have resulted in an improvement in their performance when participating as actual surgeons. To rule out these effects, total MLCI values were compared among the members of each group, according to whether they acted as the surgeon in week 1, 2, 3 or 4, to ascertain whether there was a significant difference in their surgical proficiency, by using the one-way ANOVA with a significant value p < 0.05.

Once the effects of previous observation and/or assistance were ruled out, the MLCI values of each individual anatomical plane and the totals were compared between the control and the experimental groups, by means of the ANOVA test (significant value p < 0.05). All tests were performed by using the PAST® program.11

The present protocol was approved by the Comité Interno para el Cuidado y Uso de los Animales de Laboratorio (Internal Committee for the Welfare and Use of Laboratory Animals) from the Universidad Autónoma Metropolitana Unidad Xochimilco, with
reference number DCBS.CICUAL.02.10.

Results of simulator use

Comparisons of the proficiency of group members according to the week in which they acted the role of surgeon did not show a difference (p > 0.05), supporting the idea that observation and/or assistance did not improve technique. When comparing the MLCI values of each plane as well as total MLCI values between the control group and the experimental group, all were different (p < 0.05) with a higher rate of closure for the experimental group. The MLCI values of each group, as well as their comparisons, are shown in Table 1.

The experimental group performed the three planes of laparotomy suture in 5.34 ± 1.63 minutes per linear centimetre of incision (MLCI), compared to the control group that performed it in 7.03 ± 1.77 MLCI. This difference was significant (one-way ANOVA; p < 0.05) and showed that repeating the procedure three times with the simulator improved
suturing skills in a laparotomy.

When comparing MLCI values among the participants of each group independently, and not presenting differences, it is evident that observing and/or helping during the procedure did not render psychomotor skills or abilities in the participants. The use of complementary strategies, such as the use of the simulator, is necessary for a student to develop manual dexterity and the instrument skills required for the successful application of sutures.1,6

On the other hand, the experimental group demonstrated better suture skills for the laparotomy in rabbits after performing three repetitions of the procedure in the simulator. These findings agree with those reported by Aggarwal,12 who found in his study that laparoscopic surgeons required two repetitions of a particular procedure in a simulator, in order to learn it. The simulator required them to hold the tissue, lift it up, place a clip, and then cut; for trainees, seven repetitions were required to learn to perform the same procedure. However, we have to take into consideration that this particular procedure would have a longer learning curve than performing a suture.

The results make evident the advantages of the use of simulators, when recommended as training devices for undergraduate students. However, these models should be considered as complementary tools in the teaching of surgical procedures, for they help in the acquisition of skills and abilities that lead to better performance in real patients, and eventually reduce the number of training events that require the use of live animals.13

More studies are required to determine the time and number of necessary repetitions in training with these bench simulators, in order to reach an adequate level of proficiency. Further work will also be needed to make the simulators more realistic, and to investigate ways in which to take maximum advantage of this training tool.