Rex Burch played a vital role in collecting background information
about practical animal experimentation, and was the first person
to use the term ‘alternatives’ in that context. The senior author of
The Principles, William Russell, greatly valued their collaboration

Whereas The Principles of Humane Experimental Technique1 reveals a great deal about its first author, it gives us very little insight into the character and contributions of its second author, Rex Burch. As a result, his role in the origins of the Three Rs concept could be underestimated. Happily, that can be avoided, not least because his co-author, William Russell, was solicitous in ensuring that his partner received the credit properly due to him.2 In addition, a few of us had the privilege of knowing Rex,3-5 and he recorded his own thoughts in a report produced under contract to ECVAM and published in ATLA.6

Soon after the UFAW project began, Russell informed Charles Hume that he would need some assistance, and the UFAW Council somewhat reluctantly agreed to the appointment of Burch. The plan was that Burch would “discuss with existing research workers, their techniques and attitudes to modifications, in terms of humaneness, and the idea of replacement techniques which did not require animals”. 6 To facilitate this, a letter of introduction was prepared (not without a struggle2) and sent to 20 individuals in December 1954. The response was positive, so Burch was able to begin his visits. He carried a tape recorder with him, then sent the interview tapes to Russell, who had their contents transcribed and placed in the records on which their eventual report and The Principles would be based. 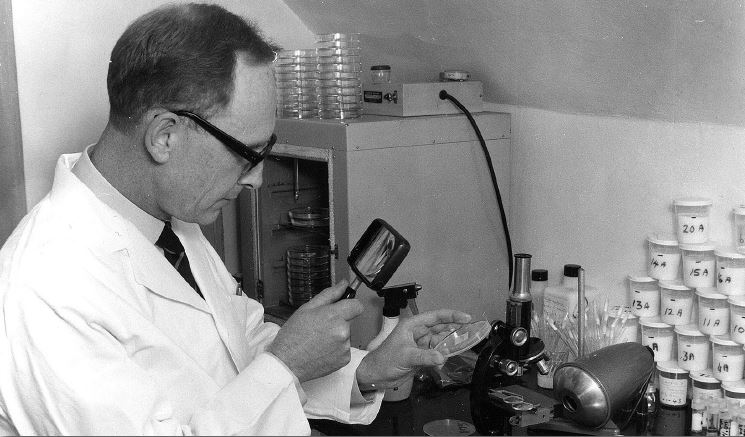 Russell later commented that, “As fieldwork for our project, Rex travelled widely over Britain, interviewing well over a hundred experimentalists, and every single one of them was cooperative. This shows, I think, not only the goodwill in the British scientific community, but the confidence Rex must have inspired by his friendly approach and his real understanding of the issues. These interviews were, of course, vitally important for our project, but I feel that there was more to them than that. Rex sowed many seeds, and helped to channel the goodwill of scientists into the more systematic approach to humane technique which has produced so many advances in recent years.”4 That was an immense achievement, since it must not be forgotten that, in those days, before the publication of The Principles with its introduction of the Three Rs concept, there was virtually no activity in the middle ground between the pro-vivisectionists and the anti-vivisectionists. There were only two positions on animal experimentation — for or against.

Burch’s success in gaining the confidence of research scientists undoubtedly stemmed from his own considerable experience in laboratory work, even though he was only 28 years old when he joined the UFAW project. He put it like this,6 in his own words: “In the early part of the Second World War, I worked in the North Riding Laboratory of Pathology and Public Health at Scarborough in North Yorkshire. One of my duties was to test milk for tubercle bacilli, and I had a constant stock of 200 guinea-pigs for this purpose. After their intraperitoneal injection of a centrifuged deposit of the milk sample (two guinea-pigs were used for each sample, one being killed after three weeks, the other after six weeks), their inguinal glands were examined for tubercle bacilli. My concern, before taking charge of this work, was about the humane killing. I was shown the method — a short, sharp blow to the nape of the neck with a specially made wooden instrument, which certainly caused instant death. I was made to practice on dead animals, and my first live guinea-pig did die instantly. From here I joined the army, serving in the Middle East and still using guinea-pigs for this diagnostic work. After the war, I read medicine at Guy’s Hospital Medical School in London (UK), but had to abort my studies and find paid work. I was offered work in the research department of Boots Pure Drug Company, where a large variety of laboratory animals were used. My appointment was that of an assistant in tropical medicine. At an early stage, disease broke out in a large mouse unit which supplied the various laboratories, and all of the mice had to be destroyed. I suggested that there should be a diagnostic laboratory for all of the laboratory animals, in order to provide early warning of disease. Within a matter of days, the Head of Research instructed me to set up such a unit. This work gave me wide experience in animal husbandry and experimental procedures, because I became deeply involved with work in the breeding units and with all those working experimentally in different disciplines. After a few years, I resigned from my appointment to set up my own research unit and breeding unit, in Huntingdonshire. My bank manager soon made me aware that there was a Professor Alastair Worden, only a few miles away, carrying out what he thought was similar work to my own. I soon made my acquaintance with Alastair Worden and, at our first meeting, he invited me to carry out histological and microbiological work for him on a casual basis. In the course of what seemed a comparatively short time, he told me that UFAW was appointing a very talented zoologist from Oxford University, Dr William Russell, to carry out a laboratory animal survey.” Worden knew that Russell needed an assistant, and suggested that Burch should contact Hume about the possibility of an appointment.

It is clear that, in 1954, Burch had greater, and wider, experience in practical laboratory work than his senior partner. Nevertheless, Burch’s crucial role in the project was not recognised at first, even by UFAW’s President, Edward Hindle FRS, who refused to support his application for membership of the Institute of Biology. Happily, largely as a result of Russell’s vigorous support, Burch became an MIBiol in mid-1959, at the time of the publication of The Principles. He was elected a Fellow of the Institute in 1987.2

For many years, there was confusion about when the term ‘alternatives’ was first used in relation to experiments on living animals. For a long while, the credit was given to Terry Hegarty, a FRAME Trustee and the son of FRAME’s Founder Chairman, Dorothy Hegarty. However, on a visit to the Russell Archive at the University of Nottingham, I discovered that the fact is that it was Burch himself who first used the term ‘alternatives’ in the context of the Three Rs — in October 1954, even before he had joined William Russell to work on the UFAW project! The story is as follows.2 Russell produced a draft of the letter of introduction to be sent to heads of university departments and research institutions, which was amended by Burch. In a sentence in which Russell wrote, “Mr. Burch is on a fact-finding mission, and with the information we hope to be able to suggest improvements in routine methods of research…”, Burch crossed out “improvements”, and suggested, as indicated in a footnote, that “some possible alternatives” should be used instead. Russell rejected that suggestion, crossed out “to suggest possible alternatives to techniques used at present” and suggested that “to produce a review of progress in the development of humane techniques” should be used. His position was supported by Charles Hume, Head of UFAW, who said, “The only thing that worries me a little is the reference to suggesting possible alternatives. Of course we do hope to do this, but if we say so bluntly I fear there may be a counter action — ‘Who are you to tell me how to do my job?’, I would suggest deleting the line ‘to suggest …at present’ and substituting something of this sort: ‘to present a review of progress in the development of humane techniques’.”

Happily, this temporary difficulty did not have a lasting effect on the excellent relationship between Russell and Burch, which was crucial to the development of the Three Rs concept. However, the publication of The Principles was not without controversy, largely because Russell rejected any external attempts to edit his text, but correspondence with Hume again bears witness to his respect for Burch. The original agreement with Methuen, publishers of The Principles, was that 80% of any royalties would go to UFAW and 20% would go to Russell, as its author, who would also own the copyright. Russell asked that his 20% should be shared equally with Burch, whereupon Hume impatiently commented that 10% of not very much would not be very much.2

Friday 5 August 1994, was a very special day for me, as I went to Sheringham, Norfolk, UK, to meet Rex Burch for the first time. As I said later,4 “I was totally captivated by his enthusiasm, his genuine excitement about the activities of FRAME and ECVAM, and his kindness. Within a few minutes, I felt as if I had known him for many years, and I knew that I would never forget him for the rest of my life”. That meeting had two important practical consequences. Firstly, the ECVAM contract, which led to a fascinating article in ATLA, The Progress of Humane Experimental Technique since 1959: A Personal View.6 That is the closest we will ever get to the autobiography he had hoped to write. It tells of his life before the UFAW project, gives his perspective on what went on between 1954 and 1959, and comments briefly on what had happened since the publication of The Principles.

Secondly, since Rex was too ill to travel far from home, I went back to Ispra, and arranged with Alan Goldberg that we should organise a workshop on the Three Rs, to be held in Sheringham, and with Russell and Burch as special participants. This was the first and, sadly, the last scientific meeting which the two authors of The Principles had attended since 1959. It resulted in a report with 58 far-reaching recommendations,7and it was a memorable event of very special significance to Rex Burch, humane scientist and gentle man.
Professor Michael Balls
c/o FRAME
Russell & Burch House
96–98 North Sherwood Street
Nottingham NG1 4EE
UK
E-mail: michael.balls@btopenworld.com