It is now 20 years since Russell and Burch
last met to discuss, with others,
the way forward for the Three Rs concept

Sitting at my computer, faced with the challenge of deciding what I could say in Wisdom 16, I suddenly realised that it was almost 20 years, to the day, since Bill Russell and Rex Burch met in Sheringham, a small seaside town in Norfolk, UK, for the first scientific meeting they had attended together since the publication of The Principles in 1959 (Figure 1). Sadly, it was also to be the last such meeting, as Rex died a few months later. 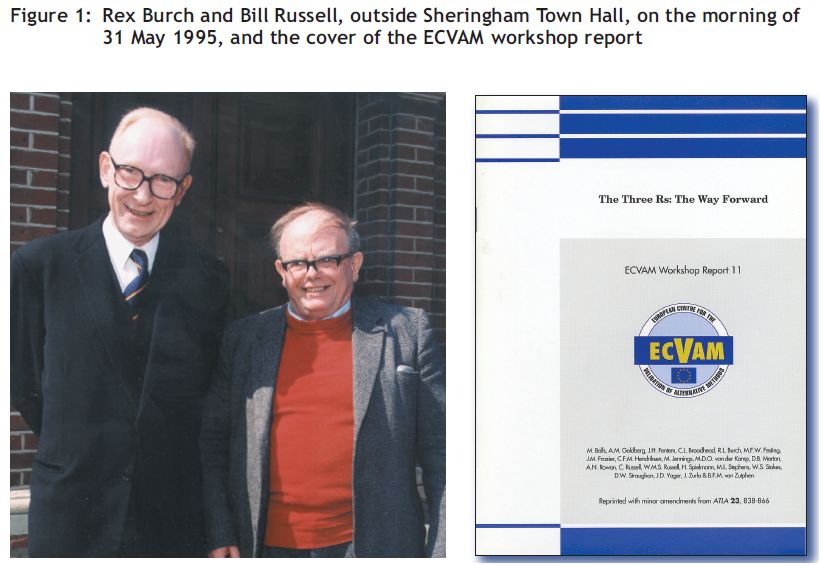 The meeting took place on 31 May to 3 June 1995, in the form of an e, which I chaired in partnership with Alan Goldberg of CAAT. Our reason for being in Sheringham was that Rex was too ill to go more than a few miles from home, so Alan and I decided that we would invite some of those committed to the Three Rs, to travel to meet him. The other participants included Claire Russell, and some of our colleagues from Germany, Italy, The Netherlands, the UK and the USA (Figure 2). 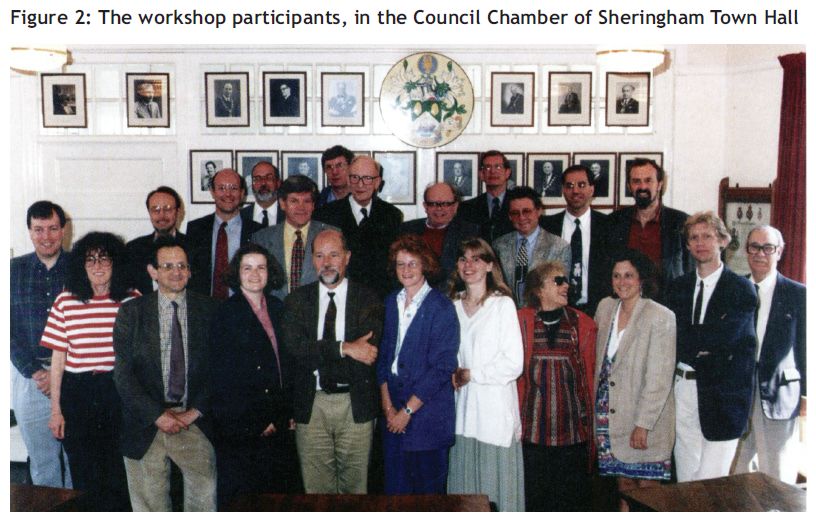 An opening ceremony was held in the council chamber of Sheringham Town Hall, where Rex had rented space for his microbiology laboratory since the early 1970s. All the participants made a brief statement, and Bill sang a song, as he always did on special occasions. These opening proceedings were recorded on videotape. The rest of the workshop took place at the Links Country House Hotel in West Runton, about a mile from where I now live.

The principal aims of the workshop were to discuss the current status of the Three Rs and to make recommendations aimed at achieving greater acceptance of the concept of humane experimental technique, and, in the interests of both scientific excellence and the highest standards of animal welfare, the more active implementation of reduction alternatives, refinement alternatives and replacement alternatives.

The report of the workshop was published in the November/December 1995 issue of ATLA.1 It reviewed the origins and evolution of the Three Rs concept as originally outlined in The Principles,2 the selection of appropriate animal species, reduction alternatives, refinement alternatives and replacement alternatives, education and training, and certain special considerations (vaccines and immunobiologicals, transgenic animals, special protection for selected animals, benefit and suffering, and the setting of targets). It concluded with 58 conclusions and recommendations, which were preceded by the following remarks: The workshop participants unanimously reaffirmed the principles put forward by Russell & Burch, that humane science is good science and that this is best achieved by vigorous application of the Three Rs: reduction alternatives, refinement alternatives and replacement alternatives.

Thus, the only acceptable animal experiment is one which uses the smallest possible number of animals and causes the least possible pain or distress which is consistent with the achievement of a justifiable scientific purpose, and which is necessary because there is no other way of achieving that purpose. Any proposed experiments on animals should be subjected to prior and effective expert review by an ethics committee or an equivalent body. The Three Rs should be seen as a challenge and as an opportunity for reaping benefits of every kind — scientific, economic and humanitarian — not as a threat.

Many of the conclusions and recommendations are as relevant today as they were in 1995. The workshop was a memorable occasion in many other ways. It was run according to the ECVAM tradition — five days of hard work, interspersed with good food and good wine, with a determination to have the words of detailed conclusions and recommendations down on paper by the end. One of my lasting memories will be witnessing the pleasure shown by Bill and Rex, as they took the opportunity to sit and talk quietly together after a gap of more than 30 years. All I have to show of that is one out-of-focus photograph, taken during the final reception and dinner at Blickling Hall, on 2 June 1995 (Figure 3). 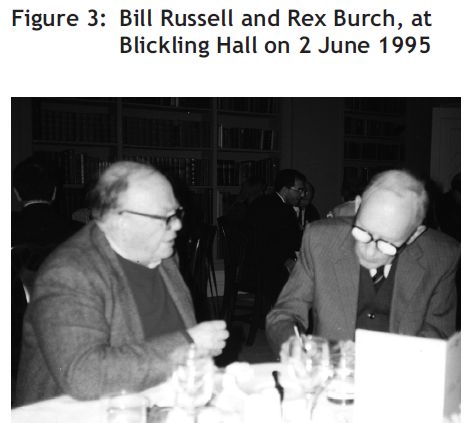 Many developments of many kinds have taken place since 1995, but, as Roman Kolar spells out in the latest issue of ATLA,3 there is still much to be achieved, if the aims of the workshop and of The Three Rs Declaration of Bologna,4 to which it led, are to be achieved, resulting in the revolution in biomedical research and its application which was proposed in The Principles. For my own part, I am concerned that stating allegiance to the Three Rs concept has become a convenient smokescreen, to which lip service can be paid, whilst little is actually permitted to change. I have therefore proposed that the focus should now be more squarely on humane science, which avoids the problem of seeming conflicts between human benefit and animal welfare,5 and I am rather confident that Bill and Rex would approve.

The Principles of Humane Experimental Technique is now out of print, but the full text can be found at http://altweb.jhsph.edu/pubs/books/humane_exp/het-toc.
An abridged version, The Three Rs and the Humanity Criterion, by Michael Balls (2009), can be obtained from FRAME.